Mary Engel’s solo exhibition at Marcia Wood Gallery, on display through January 26, adds new assemblage sculptures to her growing menagerie. Along with her usual cast of domestic animals covered with a dizzying array of found objects (beads, buttons, bullets, mirror fragments, dice, watch faces, porcelain figurines, etc.), her work has taken a turn for the more overtly mythological with the inclusion of supernatural female figures and spiritually inspired symbolic imagery.

Engel often employs archetypal animal forms as the basis for her artistic inquiry. The animal imagery (notably dogs) symbolizes, as it has long served in myth, a bridge between the natural world and the individual.

Although the artist often plays with scale, the animals’ postures capture the essence of their corporeality and evince a kinetic vitality, even as their bodies are coated in a compelling maze of mosaics that draw the eye across the surface. What is most interesting about their stances, though, is that their body language conveys an engagement with some unseen other, whether the viewer, a third party or another animal.

In this exhibition, Engel returns to some of her familiar canine statuary. “Blue” is a large dog covered in watch faces that harks back to her original “Blue Dog,” just as “Lucky Pup,” covered in tiny dice, references her older “Lucky Dog.” While not exactly exploring new ground, both are great representations of what the artist does best: contrasting the naturalistic expression in the poses of the animals with the playful artifice of the surfaces. 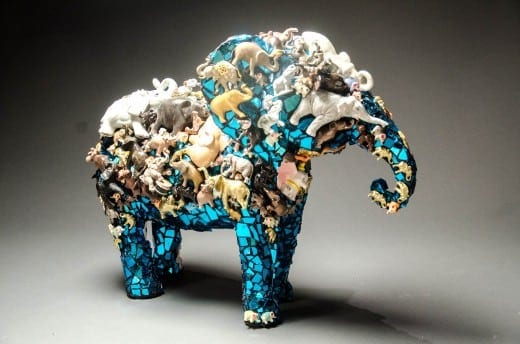 After a recent trip to India, Engel was inspired to add elephants to the collection. Three pieces, “Bullet Elephant,” “Ceramic Elephant” and “Mirror Elephant,” whose surface treatments are indicated in their titles, are visually pleasing but lack a sense of real presence, as their stances are not as evocative as past work. “Ceramic Elephant,” covered in a composite of blue mirrored shards and a multitude of mass-produced elephant figurines, is the most compelling of the trio because of its rich surface. 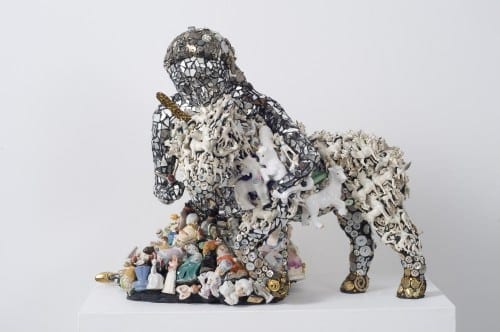 “Unicorn” is perhaps the least successful piece in the show. It depicts a mirrored female figure sitting with a unicorn crouching beside her, somewhat similar to the pose seen in the famous 16th-century Netherlandish “Unicorn Tapestries.” The composition of the work, which might reference this mythological taming of the beast by a virgin (a Christian allegory), is awkward, and it lacks the beauty of line and subtlety of her successful pieces. 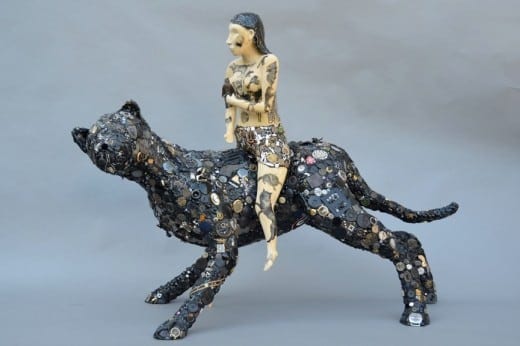 “Jaguar With Shaman” takes a slightly different tack. Here, Engel has created a bare-breasted, “native” female figure riding astride a black, mixed-media-encrusted jaguar. The rider’s brown skin is adorned with various symbolic tattoos of flora and fauna (applied transfers from vintage prints) — the Tree of Life, the lotus and various creatures, birds, a wolf, a snake, a bat, etc. — which symbolize her spiritual, shamanistic powers. Although interesting in the details of its adornment, the work’s metaphorical-mystical content feels a bit heavy-handed, and the figure appears oddly proportioned in a stiff, doll-like manner.

With “White Bear With Cub” Engel produces a more compelling dynamic. The animals relate to each other, as opposed to a seen (or unseen) human, and the effect is charming. They evoke the notion of white bears, an unusual phenomenon outside the Arctic, which play a prominent role as “spirit bears” in Native American folklore. Regardless of any mythological construct, Engel proves once again that a strong sense of animal presence can arise from the most elegant and minimal of forms.